Who are the REAL experts? ... more on privilege

Earlier this week I wrote about privilege. We all have some. Some of us have more than others.

This week I had opportunity to try to use my privilege in an effort to help some friends of mine. I'll explain what happened.


I sometimes write articles that get published by The Huffington Post.
Twice recently Autistic friends of mine have submitted to them, and not been published. Because I thought the words they had to offer were valuable I have done a bit of an experiment with HuffPo and submitted my own articles, that carried essentially the same message as my friends article did- including direct quotes from these friends, with links back to their blogs where the posts are published- and my articles have been published by HuffPo.
So- here is my question to The Huffington Post:
Why will you publish the message of acceptance of Autism, and the message of the need for advocacy to support Autistics, when it comes from a non-Autistic person..... but not when it comes from an Autistic person?
Sadly, I think I know the answer. It's because as a non-Autistic parent to Autistic children I am afforded privilege that Autistic parents are not.

You see, Autistic people are very much caught in a catch 22. Society has been told, and believes, that all Autistic people are generally less capable than non-Autistic people. This means that if they say something about parenting it is not as valuable or significant as if a non-Autistic persons words.... even when they are talking about raising an Autistic child. Then, on the odd occasion that an Autistic parent says something and people think it's great, somehow the Autistic person is now seen as less Autistic.... or sometimes even confronted and accused of lying about begin Autistic (yes- this happens).... and their view point is again put back in the position of less valuable.

Let's really have a think about the wisdom of listening to non-Autisitc people as our primary source of information about Autism. 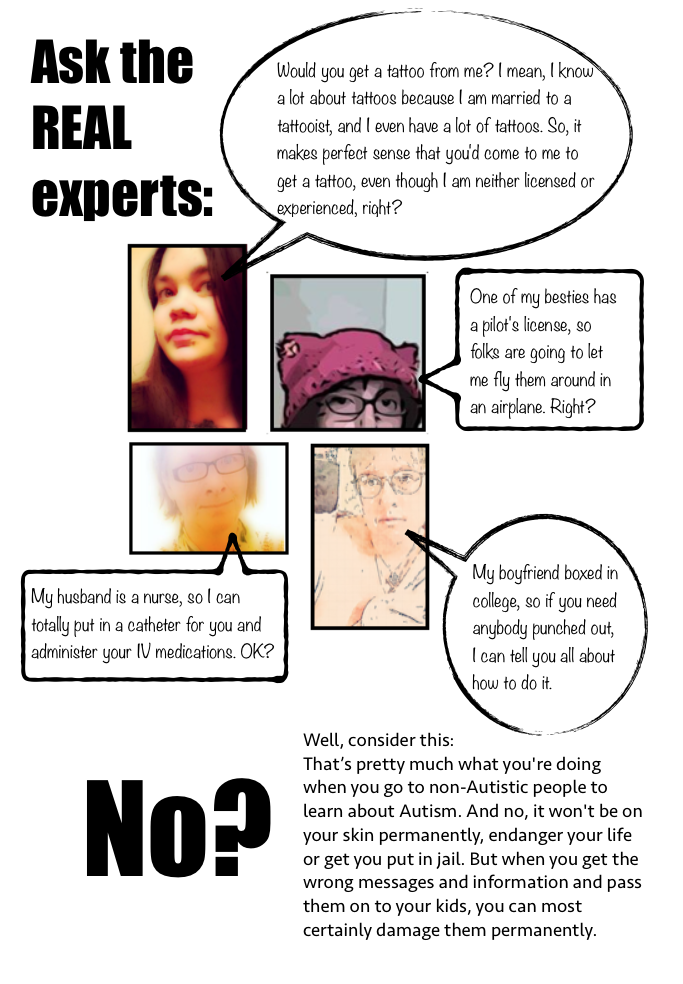 Above is an image that contains the title “Ask the REAL experts:” and has 4 pictures of female presenting faces(the one on the top left wearing a cute pink hat with ears), each with a speech bubble next to it.
The first speech bubble says, “Would you get a tattoo from me? I mean, I know a lot about tattoos because I am married to a tattooist, and I even have a lot of tattoos. So, it makes perfect sense that you'd come to me to get a tattoo, even though I am neither licensed or experienced, right?”
The second speech bubble says, “One of my besties has a pilot's license, so folks are going to let me fly them around in an airplane. Right?”.
The third speech bubble says, “My husband is a nurse, so I can totally put in a catheter for you and administer your IV medications. OK?”.
The last speech bubble says, “My boyfriend boxed in college, so if you need anybody punched out, I can tell you all about how to do it.”
Below the faces and speech bubbles to the left is the large word “No?” Followed by “Well, consider this: That’s pretty much what you're doing when you go to non-Autistic people to learn about Autism. And no, it won't be on your skin permanently, endanger your life or get you put in jail. But when you get the wrong messages and information and pass them on to your kids, you can most certainly damage them permanently.”
My thanks to Lei, Sparrow and Kassiane for their permission to use this image with their words and pictures.

So, what do you think? Should HuffPo be favouring my voice on the topic of parenting Autistic children over the voices of Autistic people who have asked to have their work published by them? I don't.

To be honest, I feel really conflicted by the fact that this happens. On one hand, I am glad they are happy to publish what I say when I do my best to let people know how much listening to Autistic people has helped me. On the other hand, it feels very, very wrong that the message that Autistic people have something to offer is only acceptable when it is filtered through a non-Autistic person. I am allowed, as a non-Autistic person to say "hey! I have something to offer here!".... why aren't they?

After all, who are the real experts?

Things I don't need to worry about: Let's talk about privilege

This article has been moved to michellesuttonwrites.com

Posted by Michelle at 1:44 PM No comments:

Promote your Page too